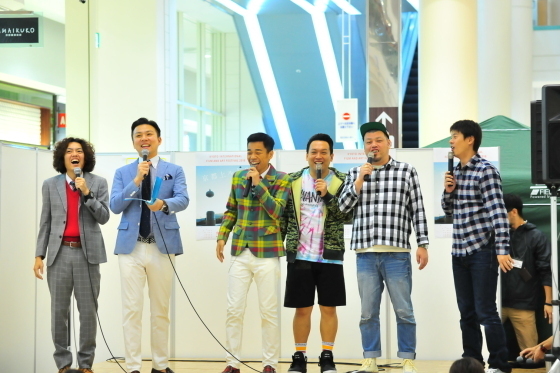 MCs Yuichi Kimura and Yukiko Takeuchi took to the stage at the closing ceremony of KIFF on Sunday 16th October, after four days of film and art exhibitions were held throughout the city. Held at Hotel Okura, the ceremony saw Chairman of the KIFF Executive Committee, Ichiya Nakamura take to the stage first, joking “I am glad nobody died during the festival,” before showing his excitement at the success of the event, and optimism for the 4th edition.

The Mayor of Kyoto Mr Daisaku Kadakawa the followed on stage. “I visited many places to see the films, and I am very grateful for the support of the staff. thank the committee for arranging. Kyoto plans to work more ASEAN countries and I hope we can use that connection in the future” he said.

The Toshiro Mifune Award, given to the actor who is most likely to make international impact on the film industry, was then announced. “Toshiro Mifune was a one of a kind, and he presented a unique way of Japan to the world,” said film critic Tadao Sato.

Hiroshi Abe was then announced as this year’s recipient of the award, and after bowing to the audience the audience gave him a very warm reception. “I’m delighted,” said Abe. “I saw many of Mifune's films and I have remade two of them films as TV drama and a movie. I played Mifune in one of those works,” he explained. “Even nowadays young actors also absorb many things by watching Mifune’s works.

“I joined an international film festival this year and I heard how Japanese films are difficult to be accepted abroad, but we should challenge in this field. I think I should challenge myself as well and I will be happy if I can take a part in that. I have played foreigner's roles in some movies and I'd like to be more involved in foreign films and exporting Japanese movies,” added Abe.

“I think that this has been a really good experience in my life. I will make more effort to work even harder as a result of this experience,” concluded Abe.

The Creator’s Factory Awards were also announced during the ceremony. Launched at the 5th Okinawa International Movie Festival in order to discover the next generation of talented artists, Creator’s Factory is split in to three category’s at KIFF. The awards went to Ayumu Iino in the Entertainment Movie Section, with a Special Jury Award for Yuichiro Taniguchi. Maiko Iguchi won the Art Section, while Mizuki Horie took home the prize in the Kids Section.

Earlier in the day Mifune’s grandson Rikiya shared his thoughts on KIFF’s opening film “Mifune: The Last Samurai.” “This project started (with) the producer from Sedic Toshiaki Nakazawa, an international producer who did the Academy Award-winning film ‘Departures,’” He said. “Initially he brought to my family company the idea about publishing a biography about Mifune. Things moved forward since he was also a movie producer. Depending on how well the book did he wanted to propose making a documentary. Fortunately the book was a very big success, so he started to create a production committee, and that’s how this project began.”

Rikiya summed up, “(my grandfather) was probably the first Japanese actor to break through internationally after the war so his legacy needs to be kept important.”

KIFF’s closing film was the heart-wrenching Belgian documentary La Terre Abandonee (The Abandoned Land) made by Gilles Laurent, a Belgian film sound engineer turned director. Set in Fukushima where the nuclear accident of 2011 took place, the film is a poetic, essay-like meditation on the beauty of the area and the sadness of the events that happened there.

Director Laurent was living in Japan but making frequent trips back to Belgium for production aspects of the documentary. On March 22 of this year he was killed in a terrorist attack in his home country. The film was about 95% complete so his widow, Reiko Udo, finished the project in honor of her late husband.

“About two years ago my husband found the man…Matsumura-san through the internet. He had remained in the area….it’s really, really close to the nuclear plant. But he did not leave because there were animals (who needed to be cared for),” said Udo. “This was the basis of the documentary. My husband was really interested in his existence, what a passionate person he is, and he really wanted to see him.”